Radiography is an x-ray based imaging technique. An x-ray generator is used to produce x-rays, which are projected toward the object. Different materials will absorb different amounts of x-rays, depending on factors such as density and structural composition.

If the x-rays that pass through the object are captured behind the object by a detector, typically photographic film or a digital detector, and a two-dimensional image is created, the process is known as projectional radiography. This is a very common medical use of radiography.

A lot of radiography art is derived from images created during medical examinations of living patients. Within the medical field, several different types of radiography is carried out, depending on what’s best suited for the circumstances.

Projectional radiography is a type of radiography where two-dimensional images are created. An object is exposed to x-rays and the resulting remnant beam (“shadow”) is captured as a latent image.

A fluorescent screen can be used to convert the “shadow” to light, which is then captured on photographic film. 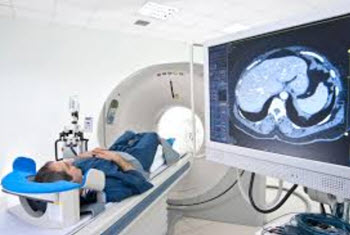 Computed tomography (CT) uses a high amount of x-rays, and computer processing power, to create images of both soft and hard tissues. The images will look as if the object, e.g. a human body, has been sliced.

When a human is to undergo a CT exam, contrast agents are often employed.

Previously, CT examinations were often referred to as CAT scans, with the A standing for axial.

During the procedure, two narrow x-ray beams with different energy levels are aimed at the bone, 90 degrees from each other.

Afterwards, the medical staff can determine the bone mineral density from the absorption of each beam by bone.(The soft tissue absorption is subtracted out.)

Generally speaking, the radiation dose received from a DXA examination is lower than for a projection radiography examination.

When we think of medical radiography, we often tend to focus on bones, and maybe pictures of lungs, but there is so much more that can be explored with radiography and that can be of use in artistic pursuits.