The fact that x-ray exposure can have serious negative effects on the living tissue was discovered fairly early on by x-ray pioneers, but it took quite a while before this knowledge was generally accepted – partly because some types of damage from x-ray radiation aren’t immediately apparent. 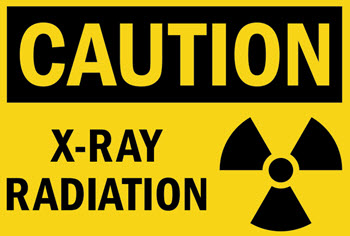 Because of the inherent hazards of x-ray exposure, x-ray artists who wish to incorporate x-ray generated images of living humans in their art will normally have to contend with images that have been obtained from patients that needed the x-ray exposure for medical reasons. Of course, this ethical dilemma is not present for x-ray artists who instead work with inanimate objects.

Even though no amount of x-ray exposure is considered completely harmless, the associated risks will increase with an increased dosage – both acute and accumulative over time. The amount of absorbed radiation from x-ray exposure varies with factors such as the type of x-ray test, accumulative length of exposure, and body part or parts involved. A person undergoing a CT scan will typically receive a higher dose of radiation than someone getting a traditional projectional radiography examination.

X-rays are classified as a carcinogen by the World Health Organization (WHO).

High x-ray exposure can cause radiation burns on the skin and other tissue. The ionizing radiation interacts with the cells, injuring them, and the body responds with redness (erythema) at the exposed site. Radiation burns are not just an acute problem; they are also associated with a higher risk of later developing radiation-induced cancers.

What is radiation acne?

Radiation acne is comedo-like papules that appear on skin that has previously been exposed to ionizing radiation. These papules do not appear immediately after exposure; instead, they develop as the acute phase of radiation dermatitis begins to resolve.

Damage to the fetus

The risk of radiation damage from x-ray exposure is greater for a fetus than for the pregnant woman.

Still, there are situations where the benefits of the investigation outweigh the risks.