Fluoroscopy is an imaging technique that uses x-rays to obtain real-time moving images. It is used mainly for medical imaging and airport security scanning, but some x-ray artists, including video installation artists, have been exploring the possibility of fluoroscopy art in recent years. 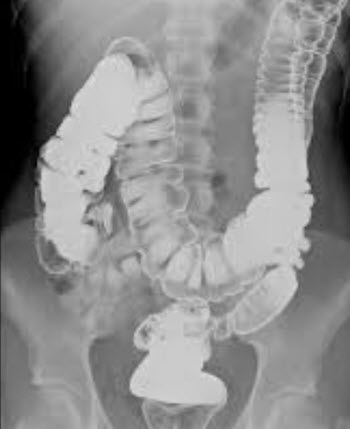 In its most basic form, a fluoroscope consists of an x-ray source and a fluorescent screen. The object that is to be imaged is placed between the source and the screen.

To create a better image, most fluoroscopes in use today contain more than just these basic parts. X-ray image intensifiers are for instance very common, and so are cameras. The camera is used to display the images on a remote display screen. Until the 1960s, fluoroscopy was chiefly used to produce live images that weren’t recorded, but nowadays saving images is the norm.

Originally, the difference between radiography and fluoroscopy were a major one: radiography fixed still images on film, while fluoroscopy displayed live moving pictures that weren’t recorded.

Today, the line between fluoroscopy and radiography is less sharp, since both fields make use of digital imaging, computerised image analysis and software programs capable of both storing and retrieving the images.

The “live-action” nature of fluoroscopy typically means that the x-rayed object will be subjected to a high absorbed dose of radiation compared to the dose absorbed when just a few still pictures are snapped using radiography. With radiography, there is just a momentary pulse of x-rays. With fluoroscopy, it is not unusual for the procedure to continued for quite some time.

Because of this, fluoroscopy art where a live human is exposed to fluoroscopy just to create art is very rare. Some of the existing art with human subjects is art created from stored fluoroscopy films created in a healthcare setting for reasons of medical diagnosis or treatment. Thus, the original film clip was not created for artistic purposes – but the patient later agreed to have it incorporated into art or used it for their own art.

Equipment that can be helpful when creating fluoroscopy art 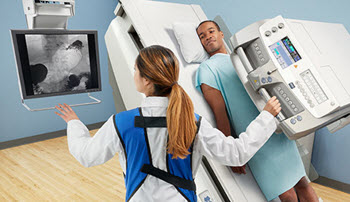 X-ray image intensifiers were introduced in the 1950s and has since become standard since they allow the image to be seen under normal lighting conditions and be recorded with a conventional camera. Early image intensifiers relied on a separate fluorescent screen, but that is no longer the case. Instead, caesium iodide phosphor is deposited directly on the intensifier tube’s photocathode.

The flat-panel detector offers increased sensitivity to x-rays, which in turn makes it possible to use a lower x-ray dose – important when you are exposing a living creature to x-radiation.

One of the main downsides is that flat-panel detectors tend to be much more expensive to buy than image intensifiers.

Today, a majority of the injected positive contrast media for x-ray imaging are iodine-based. Within this group, we find both ionic compounds and non-ionic compounds. The ionic ones are less expensive but more prone to cause allergic reactions, flushing and hot sensations. The non-ionic ones are considered safer, but up to five times as costly.

In the past, a wide range of substances was used as contrast agents for x-ray imaging, including some that later proved detrimental to the patient’s health. Thorium dioxide was for instance used until it was discovered to increase the risk of liver cancer.